The site that Mike referred to, said, in part:

The author has not posted his pictures but elsewhere on the net http://www.earlycomputers.com/cgi-bin/image-report.cgi?20040505 are some pictures that seem to be very close to what the author has: The picture above looks exactly like the IBM type 001 keypunch which was patented in 1901 and manufactured at least until 1923. In the second picture, note that the BTM nameplate has no patents shown, strongly suggesting that it was either manufactured by IBM or manufactured by BTM under license from IBM (assuming the author's dating is correct.) Also note that its serial number is lower than the author's so it is probably somewhat older.

The third photo shows slightly different keytops than the author describes but which are clearly intended to facilitate alphabetic punching.

Looking closely at the first picture, it appears that the escapement mechanism does support 80 columns not 45.

A little BTM history, from Wikipedia: The British Tabulating Machine Company (BTM) was a firm which manufactured and sold Hollerith unit record equipment and other dataprocessing equipment.

The company was formed in 1902 as The Tabulator Limited, after Robert Porter obtained the rights to sell Herman Hollerith's patented machines from the US Tabulating Machine Company (later to become IBM). By 1909, the company had been renamed the "British Tabulating Machine Company Limited". In 1920, the company moved from London to Letchworth, Hertfordshire; it was also at this point that it started manufacturing its own machines, rather than simply reselling Hollerith equipment.

The nameplate shown on the middle picture states: “Victoria House Southhampton Row London WC1” suggesting that this machine was manufactured before 1920 when BTM moved to Letchworth. Following is IBM's story, taken from: http://www03.ibm.com/ibm/history/ibm100/us/en/icons/punchcard/

IBM’s first card had 22 columns and 8 punch positions; then 24 columns and 10 positions (1900); and until the late 1920s, it had 45 columns of round holes and 12 punch positions. But it was not enough, as customers needed to put more data on each card. The challenge, of course, was that the card was running out of room and couldn’t get any bigger. If IBM invented a new or larger card, it would need to replace its entire equipment line and attempt to sell the machines all over again. How could this problem be solved?

Thomas Watson Sr., head of IBM at the time, asked two of his best inventors, Clair D. Lake and J. Royden Peirce, to each develop a new card. Both had a long history of inventing punched card technologies and had more patents between them than most American inventors of the twentieth century. He asked them each to develop a solution independently of one another. Each formed a team and went to work. Peirce wanted to use the existing card with round holes, but make it possible for each hole to represent more than one number or symbol—thereby doubling the storage of data but with half of it devoted to alphanumeric characters.

Lake’s team proposed smaller holes, rectangular in shape, which would be easier to read by the metal tabulators but also require new machines, specifically punches and readers. In the middle of this contest sat James W. Bryce, IBM’s most prolific inventor of the century with more than 500 patents. He knew both colleagues and understood their proposed innovations. Watson asked him to choose the best solution. Bryce voted for Lake’s approach because it could be implemented quickly and required the least adjustment in how tabulating machines worked. Bryce also knew there was little demand for alphabetic information, and wanted to move away from roundholed machines which were more common. Nobody had rectangular holes.

Another fact: IBM's first tabulator with alphabetic capability was not available until 1931-33.

So what is the answer to the author's confusion? To help, here is a picture of a type 11 keypunch from our collection. The type 11 was announced in 1923.

Our sign states (in part), “Early versions of this keypunch put round holes in 45 column cards. When IBM switched to 80column cards with rectangular holes in 1928, many machines were reconfigured to the new standard, including this one.” 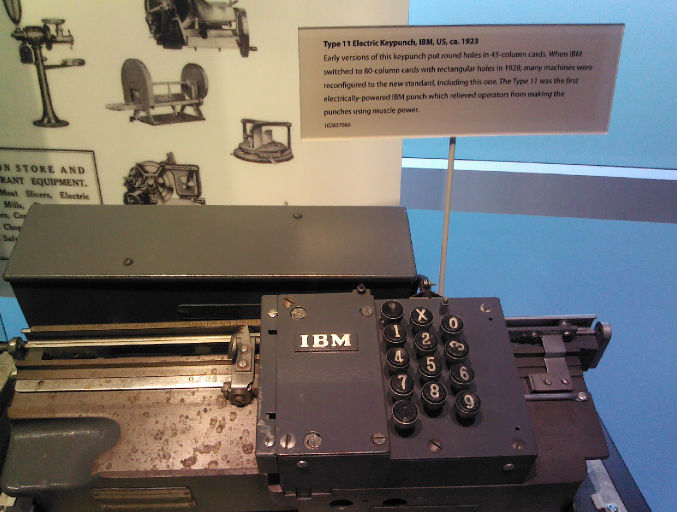