by Ed Thelen - updated April 17, 2017
the following should be checked by a real data processing expert ;-))

Warning, for "simplicity", some interesting, useful details are left out.
For a first pass, the following is complex enough already yet!
This letter discusses long card sorts.
Operations, from Grant Saviers - Aug 20, 2022

Here is a Data Flow of an Electric Company Billing Operation 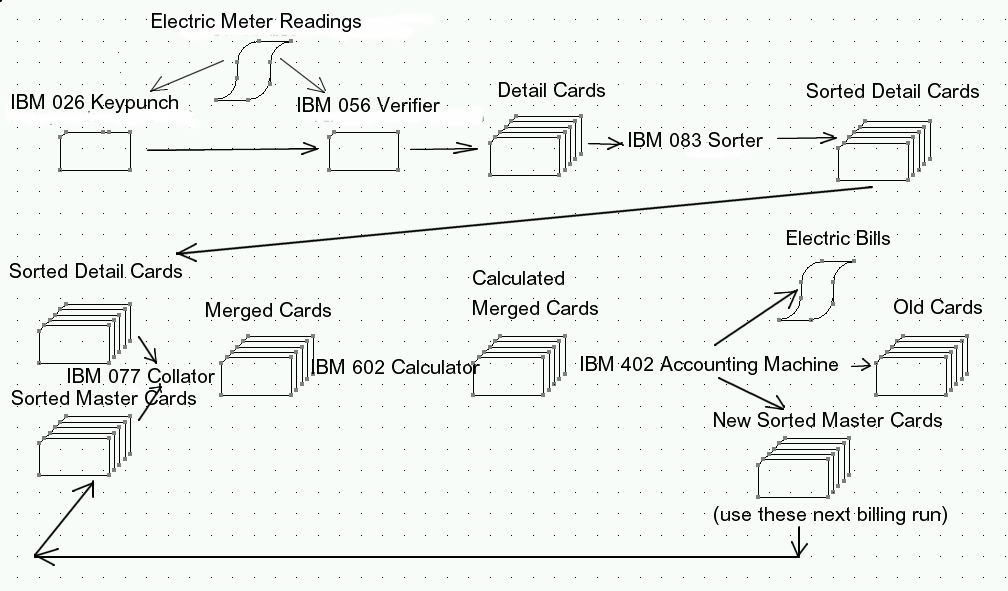 Oddly, the same general data flow is used for much of sequential business data processing, including the above mentioned
- payroll, billing, inventory, bank account processing, ...
only the types of data are different.

After replacement of much unit record equipment
- IBM 083 Sorter(s) (maybe keep one for utility use)
- IBM 077 Collator(s)
- IBM 602 Calculator(s)
- IBM 402 Accounting Machine(s)
- racks and racks of plug board programs for the above 077, 602, 402 units
with an IBM 1401 w tapes system, the data flow is remarkably similar, but the 1401 system replaces much equipment, and card handling, especially handling during sorting. 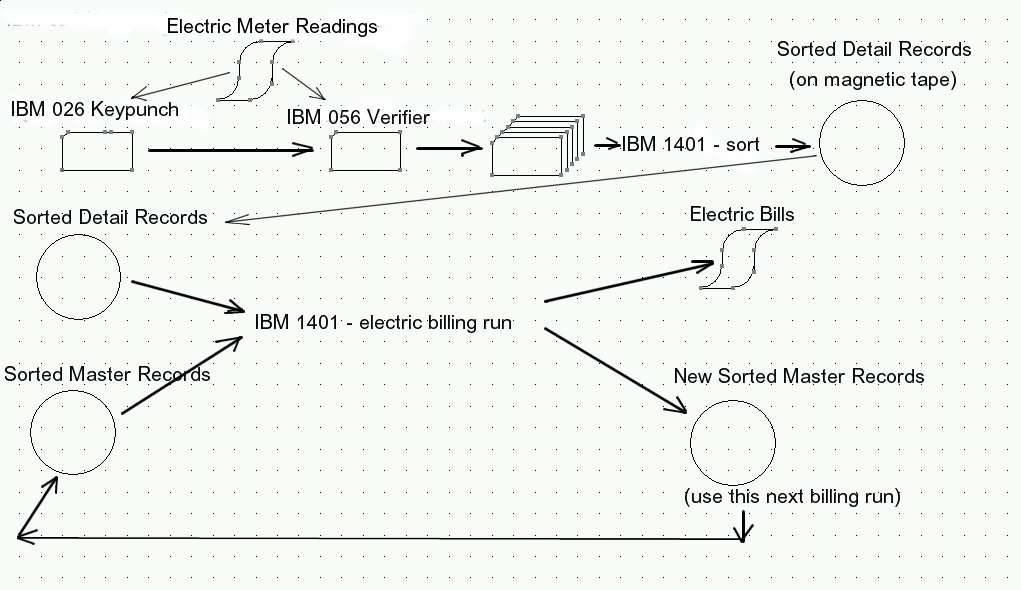 Sort 7 does not copy cards to tape. To do this, another program (not shown in Fig 2.) is used. This program is likely considered trivial, other than tape write error recovery. Standard I/O program, such as IOCS, can be used to handle the tape writing and error recovery.

(A quick (non-essential) word about placing more than one record (card) onto tape for operating efficiency. If you place only one card image per tape record or "block", you are wasting tape and running time. The key word is "record block" where maybe 8 or 10 card images are placed in one contiguous record on tape. See Block Layout in Wikipedia, page 12 of C24-3317-1_sort7spec.pdf - Sort7 Spec & Operating Procedures

above, also see Magnetic Tape Capacity and the Effect of "Tape Blocking", and also from Stan Paddock, 10/26/2009.)

Sorting data records (cards) using a magnetic tape system is MUCH faster, and much less labor intensive compared to using the physical cards and a card sorter, such as an IBM 083.

Are you familiar with unit record data processing ??
If so, could I use you as a consultant/author ??
(I was more a sidewalk superintendent, never seriously wired a plug board,
and the only time I sorted cards was to straighten up a dropped deck.)

How it is done with the current relational data bases, I have no clue -
For all I know the traditional tasks are still done sequentially ?????????

a Sort War Story - not with IBM equipment - by Ed Thelen